Instead of reviewing books like I should be doing, I have been immersed in the world of TV series! Yeah, I’m reading several books right now: Simon vs The Homosapiens Agenda (which I’m loving), Clean Sweep and Miss Peregrine’s Home for Peculiar Children. However, I have been feeling like watching shows more. Hence, not finishing one single book in 1 week. Anyways, that’s why I decided I should share all the series I’m currently addicted to! 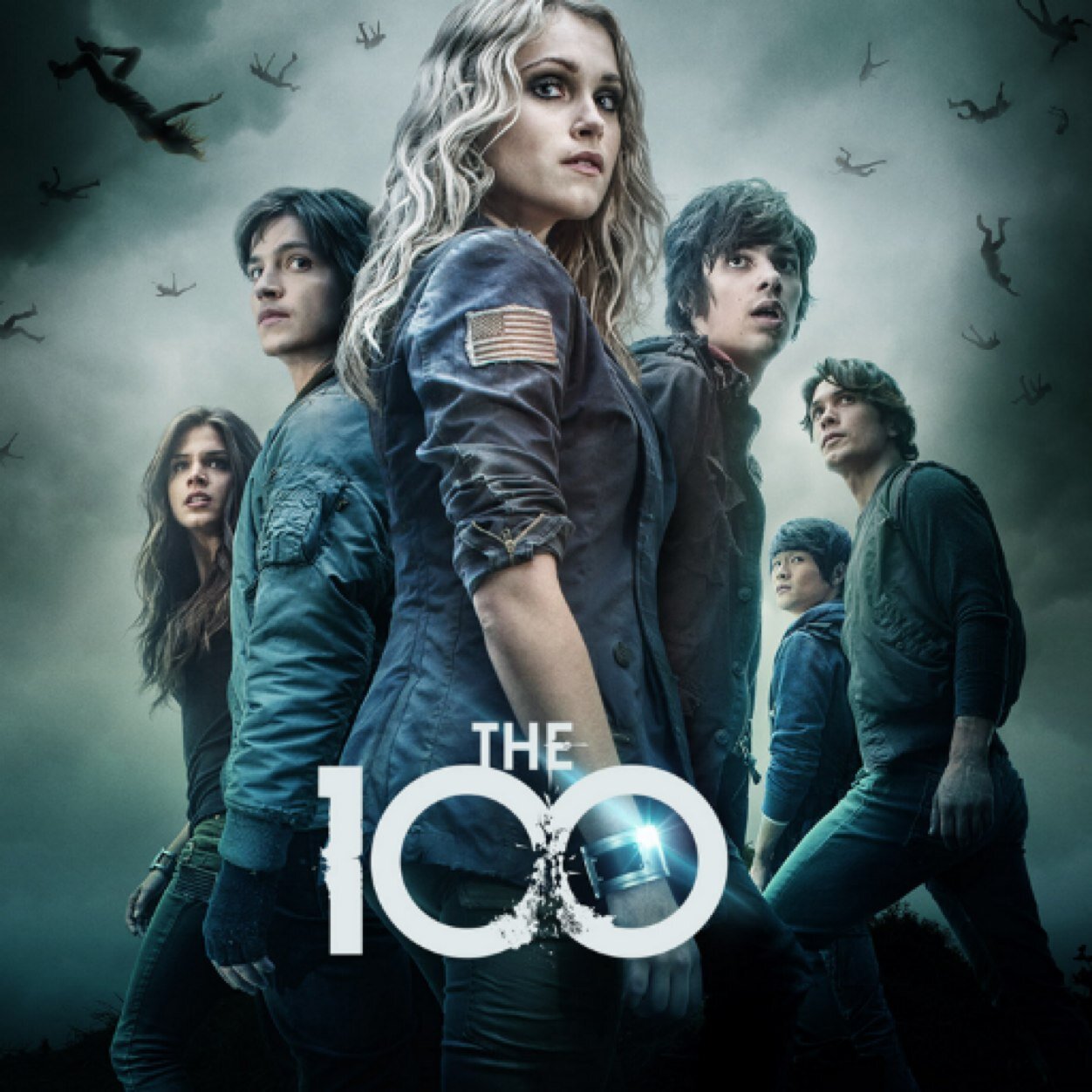 Set 97 years after a nuclear war has destroyed civilization, when a spaceship housing humanity’s lone survivors sends 100 juvenile delinquents back to Earth in hopes of possibly re-populating the planet.

So yeah, this must be one of the most underated or underwatched tv series out there right now. This might seem like one more teenage drama, it’s CW ffs. However, don’t be fooled. The 100 is one amazing series that makes you question your physical and moral limits as a human being. It’s addictive, it’s fascinating. GO WATCH IT. Also, season 3 has started 2 weeks ago and DEAR GOD HAS IT BEEN AMAZING! The showrunners are killing me and let me tell you, they are some shipsinkers and sure love to troll with us fans!

Alicia has been a good wife to her husband, a former state’s attorney. After a very humiliating sex and corruption scandal, he is behind bars. She must now provide for her family and returns to work as a litigator in a law firm.

This is a show that has been running for 7 years now and I’m devouring this new season. Alica Florrick is a lawyer that has been through a lot but now has gone back on her feet and is showing the Chicago Scene that she is a force to be reckoned with. I’m a little appreensive about how everything will play out in the end as there are some rumors that this might be the final season. If you like politics, conspiracies, unfullfilled romance and fast-paced tv series, give it a go. You won’t be disappointed.

Two young women waitressing at a greasy spoon diner strike up an unlikely friendship in the hopes of launching a successful business – if only they can raise the cash.

I might be a little late on this ride but I’ve recently started watching 1 Broke Girls and DAMN is it catchy and funny. I love the dynamics between Max and Caroline and, honestly, all the characters have their spotlight and the show wouldn’t be the same without them. Earl, Sophie, Oleg and Han make the show what it is and even though I am only on Season 2, I’m sure it won’t be long until I catch up with the 5th season that is currently airing.

Honorable Mentions: How to Get Away with Murder and Law and Order: Special Victims Unit

HTGAWM: A group of ambitious law students and their brilliant criminal defense professor become involved in a twisted murder plot that promises to change the course of their lives.

This are two special series for me. I stopped watching How to Get Away with Murder after watching Season 2 episode 3 because I felt like I needed the whole season completed so I would binge watch it. Why? Because so damn much is going on! Also, I’m not a huge fan of flashbacks so binge-watching it will make it easier for me to watch this amazing series. Afterall, the flashbacks are what make the show! Law and Order: SVU is one of those series that I watch whenever a episode is airing on TV. I love the show but never get around to watching it from episode 1. Let’s be real, the show has, what, 15 seasons? Anyway, it’s a wonderful series, that is actually realistic, as opposed to many criminal tv series that are airing right now. Sometimes justice is served, other times the criminal is never caught. Also, it’s much better than Law and Order (the original).

A former superhero decides to reboot her life by becoming a private investigator.

I watched this in 3 days more or less and I guess that says it all!

When I started writing reviews, I mainly just tried to express my feelings over a book and that’s it. I didn’t really talk about the book. Now, things have changed. I feel the need to write about what happens in certain scenes, about what that character did and how the other reacted, things like that. Basically, I felt the need to turn the “reviews” into booktalks. But then, another problem arises: what can I tell the other readers? Should I be specific or try to explain while not explaining? Should I maybe give hints to what happens? Damn it, what should I do??? What should I write? I don’t want to spoil anyone but my review won’t make any sense if I don’t explain what I’m writing about. I have all this ideas on my mind and then I end up writing absolutely nothing.

And this is how this post came to mind. My mind is all fucked up. So, I’ve come to a conclusion. Imma write reviews with spoilers! Full spoilerly spoilers! If you haven’t read a book and don’t want to know how it ends or what happens, just read the first and last paragraphs, I won’t be as cruel and spoil a book in the first line of my review. I’m not that mean. From now on, the first paragraph will tell you my general opinion of the book and what it is about, the last one will mention my feelings more intensely and will tell if I recommend or not the book. Should be easy right?

I have to admit, I’m kinda worried about this. I just want to write more and more but I keep deleting reviews or changing them because I don’t know what it’s okay to mention and what is not. So, I think it’s better to adopt a fuck it attitude and just go with the flow. I’ll write what I want and if I see the spoilers are huge I’ll just write a little warning, like I did in some of my first reviews.

If you don’t like spoilers, fear not my dear friends! Just read the first and last paragraph of my reviews and your book’s expectations will be intact!

Also, I’m just talking for myself. Sofyy will continue writing her reviews as she as always done!

It’s been some time now since I’ve began reading Young Adult novels and series and I can say I’ve come across some really good books and some that, well, aren’t that good. But one of the things that make me shocked and sometimes make me laugh is the message some of these books convey to the readers.

There are some pretty ridiculous ones but others make me worried about how girls in special react to them. Maybe I’m the one wrong here and should start doing what the characters in some books do!  Here are the most hilarious and, if I’m honest, really stupid ones that come to mind now:

Now, try finding books that fit these descriptions! I know there are so so many things I’m forgetting right now so, what are the most hilarious but seriously wrong that you have learned from YA books?

I recently found out that many people have problems with 1st person POVs. At first I just couldn’t help thinking that most of the books I read ARE narrated in the first person and I never really thought about it. If I’m being honest, I must admit, I like first person POVs. They are more captivating and I love being inside the head of the character without having to read “he/she” all the time. I feel like I’m more connected to the characters. However, there are exceptions where I don’t mind reading in a third person POV but are few the books like that that I finish reading. Like I said, it might be that I think and feel more like the character, I don’t really know. Maybe it’s because when I first really started reading a lot (and I’m talking post Harry Potter phase) most of or all the books I read were, in fact, narrated in the first person.

Now, I completely understand why people find 1st person POVs rather unattractive or annoying. Firstly, it all depends on the character. If the character is annoying there are higher chances that most won’t even bother to finish reading the book. It happens all the time with me! For example, weak, irritating and/or bitchy main character are a huge no no for me. I don’t like them and I just don’t want to waste my time reading about a them. These traits are more obvious in a 1st person POV and the thoughts expressed by the character can annoy the hell out of a person. I usually just want to break something and be able to take the character in question out of the book and give him/her a little shake. But, unfortunately, we can’t do that so I just try to stay away from this type of books.

Secondly, another thing that might bother some people is not knowing more about the others characters. Sometimes the secondary character are more interesting that the mains and we just want to have more insight on what’s happening to them. Also, and I’m only talking about the books I’ve read, it get’s a little upsetting when something big happens and I want to know what everyone is thinking but no, we just know one character’s reaction…

And that’s all the negative things I have to say about 1st person POV. As I said, I’m a huge fan and I don’t know if my tastes will change in the future (it is actually the most probable thing) but for now, I don’t have a lot to say about the downs and ups of reading in 1st person or 3rd person.

If you’re curious, the books in the 3rd person that I’ve most enjoyed and Gabriel’s Inferno (it’s an amazing book that I would recommend to those who like to read adult books. It’s really good and, psst, there is no hardcore scenes, damn I don’t really want to spoil the book, but it’s a brief of fresh air to find a book that is mostly about emotions and sexual tension that sex in itself and some really really strange things that I really don’t want to read about.The 3rd person POV was really well done and I think that the book was written in the 1st person it would lose a lot of the content and some of its beauty) and It Had To Be You (first part of the book was good but by the end it drags a little but it was a nice read and the 3rd person POV allowed me to know what was happening always with almost every character.)

What do you prefer, 1st or 3rd person POVs? And why?